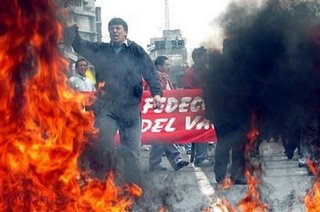 Ecuador - Government troops fired teargas in clashes with workers and students after state employees downed tools and took to the streets demanding that the government break of trade negotiations with the U.S. around the controversial Free Trade Agreement of the Americas (FTAA). Workers who are currently considered contract employees were also calling on the government to grant them full-time worker status. Disturbances primarily took place in the capital, Quito and Lago Agrio, 118 miles east of there. The unrest caused oil exporters to to shut down more than 70% of their operations. Ecuador is South America's fifth-largest oil producer.