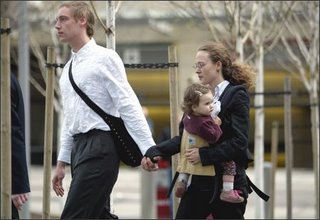 Briana Waters with her daughter and husband

Seattle, Washington, U.S. - Briana Waters, 30, of Berkeley, California was indicted on charges from the May 2001 fire that destroyed the University of Washington Center for Horticulture building, that was claimed by the Earth Liberation Front (ELF). She is the first person to be publicly charged in connection with that arson, which targeted Toby Bradshaw, an associate professor of forest resources whose genetic research focused on showing how poplars grow by mapping their DNA.

The fire was one of two set by the ELF on that same night. The other one in Clatskanie, Oregon destroyed the offices of a poplar farm. 13 people face conspiracy charges in connection with that and more than a dozen other arsons claimed by the group.

The ELF accused Bradshaw of being "the driving force in G.E. (genetically engineered) tree research," and a person who "continues to unleash mutant genes into the environment that is certain to cause irreversible harm to forest ecosystems."

Waters joined tree-sitters and forest defenders in the summer of 1999 on Watch Mountain in Washington's Gifford Pinchot National and produced a 60 minute documentary about the campaign called WATCH! (2001). She faces a minimum sentence of 35 years in prison if convicted of all charges. No one has ever been injured in an ELF action. A trail date was scheduled for June.