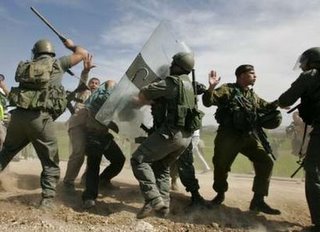 Bil'in, The West Bank, Palestine – Israeli Defense Forces (IDF) soldiers brutally attacked and dispersed a group of Palestinian, Israeli, and international demonstrators during their weekly protest against the separation wall. At least one protester locked himself to the partially constructed wall with a tubular metal device. Soldiers choked another man until he passed out.

Following the violence 150 activists protested their treatment outside of the Kiria army base in Tel Aviv. At that demonstration a 17-year-old member of Anarchists Against The Wall, Matan Cohen, was shot in the eye with a rubber bullet. Doctors preformed surgery but are not sure if he will ever regain sight in that eye. Four others were arrested and beaten at that demonstration.