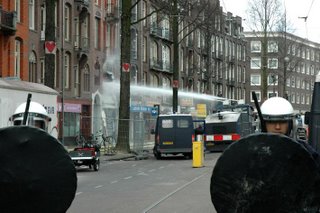 Amsterdam, The Netherlands - Dutch police began another "eviction wave," clearing out all the squatted buildings that had lost their court cases since the last "eviction wave" in the fall of 2005. The Spuistraat and the Vijzelstraat buildings were evicted without much resistance, but this was not true of the Bilderdijkstraat (Wild Western) squat. Riot police were splattered with paint balloons as they sprayed the building with a water cannon. Officers in a shipping container were finally able to enter the building through a window on one of the upper floors while they hung suspended from a crane. A number of people were arrested.