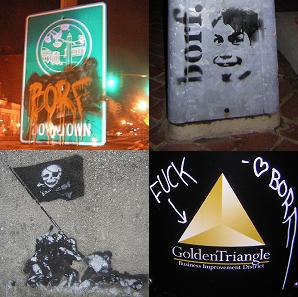 Washington, D.C., U.S. - Street artist and political graffiti writer John Tsombikos popularly known as "Borf" who recently pled guilty to felony vandalism charges, was sentenced to 30 days in jail followed by 200 hours of community service, including 80 hours of cleaning up graffiti. And he must pay $12,000 in restitution. He also faces an additional 17 months in jail if he is arrested again within the next three years. D.C. Superior Court Judge Lynn Leibovitz berated Tsombikos and told him that what he did was "not artistic expression," or "political expression."