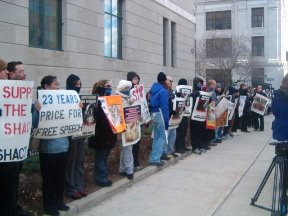 Trenton, New Jersey - The prosecution has rested its case against six animal rights activists, associated with a group called SHAC (Stop Huntingdon Animal Cruelty), on trial for terrorism charges in connection with operating a website. The activists face millions of dollars in fines and some face as many as twenty-three years in jail. The prosecution called a long line of corporate executives and employees of Huntingdon Life Sciences (HLS) and companies associated with them.

HLS is an animal testing company that performs vivisection experiments on about 75,000 beagle puppies, rabbits, mice, and other animals each year. Unlike traditional dissection, vivisection means that animals are cut open and dissected while they are still alive, usually without the use if anesthetics.

Many of the witnesses sobbed as they recounted how animal rights protesters threatened their profits and harassed them through a campaign that involved pickets and rallies as well as vandalism and the targeted destruction of property. During the seven year protest campaign there was even one incident in which a person was injured. An animal rights advocate attacked Brian Cass, managing director of Huntingdon in England, with an axe handle, seriously injuring him.

The six individuals who are on trial have not been accused of carrying out or explicitly encouraging any of the illegal acts described in court, only of maintaining the SHAC website. The defendants claim that all of their actions are protected by the first amendment of the Constitution, which protects free speech. Animal rights advocates have called on supporters of free speech and animal rights to attend court in solidarity with the defendants as they present their case.