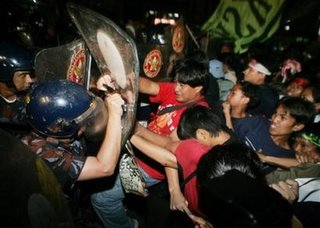 Quezon, Philippines - Thousands ofanti-government protesters converged at the People Power Monument in Quezon City to commemorate the 20th anniversary of People Power 1, a mass demonstration which led to the ouster of the Marcos regime in 1986. Protesters on Wednesday were calling for the ouster of President Gloria Macapagal-Arroyo. They started the day with offers of flowers to riot police, but sent them high-flying projectiles and shoves after police attempted to stifle the demonstration. Anti-Arroyo protests are planned to continue for at least the next three days.