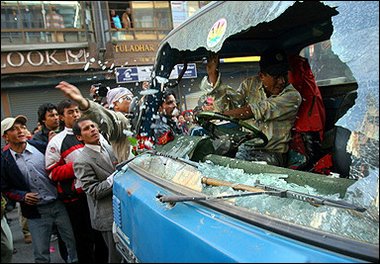 Protesters smash the windshield of a truck full riot police

Kathmandu, Nepal - Anti-Monarchy protesters marked the one year anniversary of King Gyanendra's seizure of power with massive violent demonstrations. The day, February 1st, has been dubbed "Black Day." The King dismissed the Parliament and assumed power under the pretension that only he could adequately put down the growing Maoist insurgency that controls much of the countryside.

Riot police and soldiers responded with brutality, violently beating, hosing down and arresting scores of demonstrators. Amnesty International reported that 1,350 people had been detained since January 19 and 888 of them were still in custody. Some were arrested in their homes in what the government called a "precautionary measure." Police cut phone lines of over 100 suspected organizers, opposition parties, and human rights activists. Some organizations like the Nepal Communist Party have been without phone service for a month.

Pro-monarchist Buddhist monks displayed portraits of the King and Queen at a small rally. Other supporters of the King, many of whom are members of the Rastriya Prajatantra Party, rode motorcycles through the streets flying royal flags and expressing support of the riot police and soldiers. Many of the soldiers wore masks to protect their identities.

After dark anti-King protesters paraded with torches they lit from burning tire road blockades and continued to demonstrate. Regular violent suppression of demonstrations over the past year does not seem to have discouraged protests. The Kings focus on eradicating the Communist guerrillas seems to have backfired. The insurgents have gained ground since his succession to absolute power.

In the past week they openly held demonstrations in the capital for the first time, shot and killed a mayoral candidate, and burned down a garage. Rebels also staged simultaneous raids on the Royal Nepal Army barracks, a district prison, a district administration office and a district police office. At least three soldiers and 17 police officers were killed.