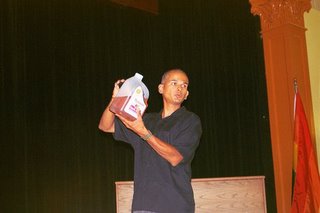 The photo of Rod Coronado originally appeared in the September 2003 issue of Zenger's Newsmagazine with the following caption, "At his August 1 lecture in Hillcrest, Rod Coronado used this apple-juice jug and non-lethal fluid to demonstrate how he made incendiary devices in the 1990’s."

San Diego, California, U.S. - Native American environmental activist Rodney Adam Coronado, 39, has been indicted in California on one felony charge of demonstrating how to use a destructive device. He is accused of admitting to being a member of the Earth Liberation Front and demonstrating how he constructed incendiary devices at an August 1, 2003 lecture in Hillcrest, California. Rod used similar devices in the 1990's while acting on behalf of the Animal Liberation Front . If convicted, he faces up to 25 years in prison and/or a $250,000 fine.