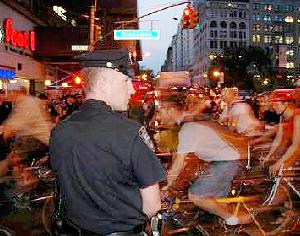 New York, New York - New York City's monthly Critical Mass riders and the rides accused organizers win in court. Justice Michael D. Stallman of State Supreme Court in Manhattan sided with four defendants named in the city's lawsuit against the Critical Mass bicycle ride and told the NYPD layoff the riders who have been under attack since the August 2004 ride swelled into the thousands on the eve of the Republican National Convention. Since then hundreds of participants have been arrested and prosecuted for "parading without a permit" and "disorderly conduct."

Police have gone to extreme measures and sparred few expenses to stop the rides. Undercover police officers have been caught infiltrating the ride, along with other bicycle rides including a memorial one for cyclists who were killed in accidents with automobiles. They have also followed cyclists with divisions of police officers on motor scooter, squad cars, unmarked SUVs and even a helicopter. Last month, while attempting to surround the ride, two officers in scooters collided head on and were seriously injured.

Judge Stallman disagreed the city's claim that cyclists were a parade that required a permit simply because people "travel en masse." He also said that police should not be allowed to arrest individuals simply for having a bike and being in Union Square Park before the ride began. The success of the case relied heavily on the fact that Critical Mass is a leaderless event that isn't officially organized by any individual or group. No one has ever sought a permit for the ride and thus the police have not been able to deny the ride a permit.