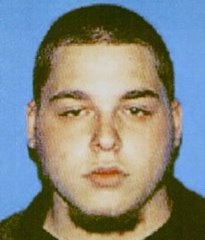 New Bedford, Massachusetts - Neo-Nazi Jacob D. Robida, 18, entered a gay bar and attacked a patron, hitting him in the head with a hatchet. He then shot the man in the face and two others in the back and chest. Two of the injured customers are in critical condition and a third is reported to be in good condition. Paul Walsh, a Bristol District Attorney, said that "he's armed and extremely dangerous" and "we think he could strike again."