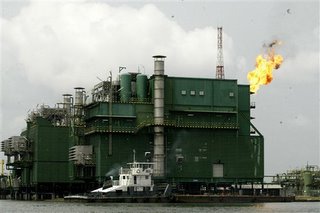 Forcados, Nigeria - The Movement for the Emancipation of the Niger Delta (MEND) has kidnapped nine foreign oil workers who were working for Willbros, a US engineering firm which is a Shell subcontractor. They then set fire to Shell's Forcados oil export terminal. MEND is an armed group who first became known last January when they took four other oil workers hostage. The group has claimed responsibility for numerous attacks against various pipelines and oil installations, which have resulted in the deaths of at least two dozen people.

A militant member of the group told a BBC reporter that they were declaring "total war" on all foreign oil interests in the Delta. In an e-mail quoted by Reuters news agency after Saturday's attack, the group threatened action "on a grander scale" and went on to say that they had to carry out the attacks in response to "pleas from our kin in these communities."

The four hostages from January, including an American boat captain, were all released peacefully after 19 days in captivity. Militants are currently holding three Americans, two Thais, two Egyptians, a Briton, and a Filipino who were on a pipelaying barge.