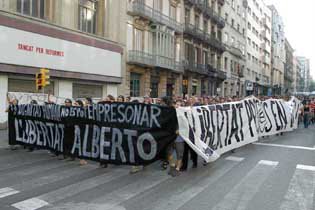 Barcelona, Spain - Three anarchists, two Spanish and one Italian-born, were arrested by anti-terrorism police agents early Thursday. The three youths are facing charges in connection with the December 15th firebombing of the Department of Justice of Catalonia and other attacks against CIRE, a prison labor company. The bombing was done in support of Italian-born anarchist prisoners, Alberto Maria Bettini and Francesco Gioia. The two were among the seven demonstrators police arrested at a 300 person strong June 25th protest in solidarity with anarchist prisoners in Italy. In Barcelona, following the arrests, bombs exploded at the Italian Cultural Institute, killing a police dog and wounding an officer, and a Fiat (Italian) car dealership.

Police claimed that the three individuals arrested yesterday were prison activists who have been supporting the release of the arrested demonstrators. Both Alberto and Francesco are accused of belonging to Il Silvestre, a group that publishes the radical environmental anarchist magazine Terra Selvaggia. The publishers, many of whom are under house arrest, are accused of promoting sabotage and participating in direct action. Francesco Gioia was recently extradited to Italy to face charges of promoting sabotage and participating in direct action and additional charges for escaping house arrest.

Police have not yet released the names of the three anarchists who were arrested most recently in Spain, the oldest of whom is 25. One was arrested on his way to work and the other two were arrested at their home, a squatted building which was registered with the police in the past week. One of three was later released. No incendiary devices were confiscated by police during the arrests.