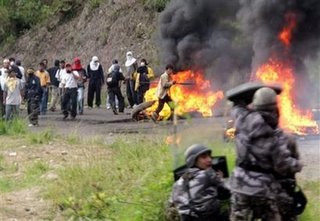 Baeza, Napo, Ecuador - Hundreds of indigenous protesters blocked the road to a key pump station along a main oil pipeline in the Amazon. Demonstrators shut down multiple pump stations and briefly held some of the workers captive. The government declared a state of emergency and deployed at least 300 troops to one location. The soldiers fired tear gas and live ammunition at activists but were not able to re-take the Sardina pump station, located about 55 miles east of Quito. Numerous protesters were wounded by the gunfire.