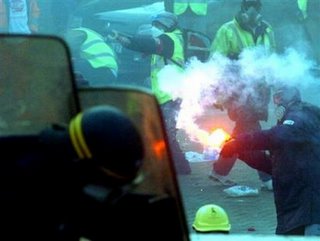 Strasbourg, France - Dockers are protesting the EU in Strasbourg which is debating a proposal to "liberalise" European ports. The dockers know that if this happens they will most likely loose their jobs to private contractors. Thousands of dockers have descended upon Strasbourg. The police have responded with the use of tear gas and water cannons. As a result the dockers have utilized firecrackers, stones and metal missiles, smashing windows and causing "considerable damage". Elsewhere in Europe dockers have been on strike in protest shutting down ports in Rotterdam in the Netherlands, Antwerp in Belgium and Le Havre in France.