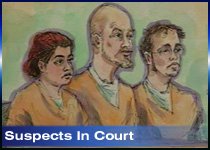 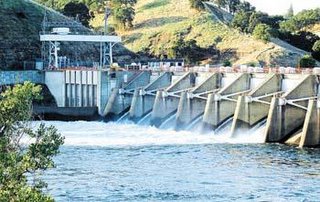 Sacramento, California, U.S. - FBI documents released today reveal details about the state's case against Eric McDavid, Lauren Weiner, and Zachary Jensen, who were arrested Friday for allegedly conspiring to blow up U.S. Forest Service buildings buildings and cell phone towers on behalf of the Earth Liberation Front. According to the criminal complaint the group considered bombing the Nimbus Dam on the American River near Sacramento, a cellular telephone tower, a power station, banks, trucks, mountain-top-removal projects in West Virginia and Communist Party offices.

The complaint went on to claim that the three "scoped out" the US Forest Service's Institute of Forest Genetics in Placerville, California, building and the Nimbus Dam, on January 10th. The following day they allegedly purchased ingredients for a homemade bomb at an area Wal-Mart store. Agents say that they recovered a notebook from Eric McDavid which contained a diagram of the Forest Service Institute and pictures of pipe bombs.

Information in the complaint comes from a paid "confidential source (CS) who is deeply imbedded within the subjects' cell. The CS has worked for the FBI since early 2004. S/he has agreed to testify in court." Supporters identified the CS as a young woman named "Anna" who "went to Auburn" with the defendents shortly before their arrests. The document says that she has has provided information in at least 12 anarchist cases since 2004. She has traveled to and infiltrated various anarchist gatherings and protests across the country including the Biodev 2005 demonstrations in Philadelphia, a CrimethInc. convergence in Indiana and the Feral Visions green anarchist gathering in North Carolina. A police officer suffered a fatal heart attack during a confrontation at the Philadelphia protest which the defendants are now being linked to.

Additional information provided in the complaint was gathered from the defendant's own blogs and and MySpace.com an online community were at least one of the defendants has a personal profile and blog. MySpace is a popular networking and dating forum used by young people. MySpace profiles regularly contain fictitious information about individuals. For instance, one of the defendants profiles which was used against him in court said that he lives in "the barren wastelands, Morocco." A profile on the LiveJournal.com personal publishing site and online community was also used as evidence.

All three suspects are being held in the Sacramento County Jail. They have had difficulty receiving vegan or vegetarian meals from jail authorities. Lauren's case is particularly serious because she has Lymes disease which is maintained through dietary control and is also lactose intolerant. She has requested that people contact the jail on her behalf and request that she be given food which she can eat.