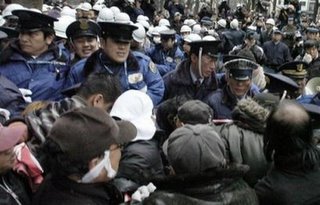 Osaka, Japan - Angry homeless people scuffled with some of the 350 police and 750 city workers who began removing their tent dwellings from two city parks. The evictions began in the wake of a recent court ruling that allowed a homeless man to register a park as his legal residence. Japanese law requires that everyone must be registered at an address. The city is trying to remove poor people from public view in preparation for the "World Rose Convention" in May and an urban greenery event which begins in March.