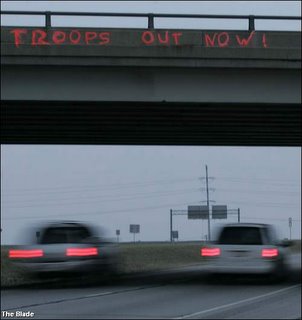 Ohio - Former Toledo city councilman and one-time mayoral candidate Mike Ferner, 54, and his brother John Ferner, 46, of Columbus were arrested for spray-painting anti-war and anti-Bush slogans on highway overpasses along I-475/U.S. 23 in Maumee and Sylvania Township. Mike served in the U.S. Navy from 1969 to 1973 where he received an honorable discharge as a conscientious objector. He was elected to Toledo city council in 1989 and narrowly lost the 1993 mayoral election. He has since worked as a nonviolent peace activist who has been arrested numerous times for hanging banners and engaging in sit-ins. His wife Sue Carter said that "the real crime is going to war on a lie, violating international treaties, and spying on the American public."