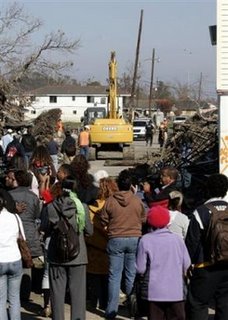 New Orleans, Louisiana - A coalition of community members and anarchist relief volunteers with the Common Ground Collective faced down demolition crews and forced them to halt their efforts to raze hurricane damaged homes in New Orleans impoverished lower 9th Ward, early Thursday. Officials who are legally barred from demolishing private structures without the owner's consent before January 6th, claimed that they were only clearing "debris."

Local police, Department of Homeland Security, and U.S. Army officers were on hand during the confrontation. Volunteers with Common Ground Relief, and the People's Hurricane Relief Fund planned to stay in the neighborhood to patrol and watch for illegal bulldozing. They expressed concerns about potential harassment and disruption from Black Water Security and the National Guard troops.