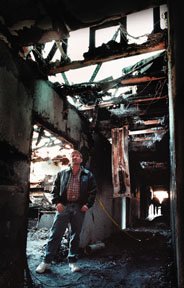 Medford, Oregon, U.S. - Suzanne Nicole "India" Savoie, 28, of Applegate surrendered herself to federal authorities after she was indicted for the 2001 Earth Liberation Front (ELF) arson of the Superior Lumber Mill offices in Glendale, Oregon. Suzanne received a subpoena on December 7th. The same day at least six other individuals received subpoenas for the same February 16, 2005, Eugene Grand Jury and indictments were announced for seven others.

Federal agents informed her she was a suspect the the lumber company fire and two other ELF arsons when they served her back in December. She said that they wanted her to implicate others, or she would "take the fall for all the men" involved. According to court documents in a related case, Suzanne functioned as a lookout or "watchdog" for in the arson with her ex-boyfriend, who was one of the individuals arrested in December. Suzanne is an environmental activist who has been helping to organize a campaign to preserve the Bald Lick roadless area on Oregon's Black Mountain.