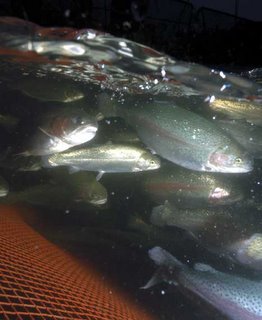 Kent, England - Police believe that animal liberation activists may be responsible for releasing 50,000 young Rainbow Trout into the Bewl Water Reservoir near Lamberhurst, in south-east England. Investigators say that a number of individuals in a boat must have deliberately tampered with nine of the ten large cages at a fish farm on the reservoir, around 3am Friday night.

If the Animal Liberation Front or like minded people are behind the sabotage it would be the first time they targeted a freshwater fish farm. "It is hugely worrying. I have never heard of this being done before," said Bob West, a spokesman for the Association of Stillwater Game Fisheries Managers. The farm estimated their losses at £100,000 or about $176,400.