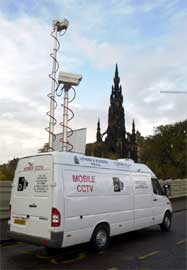 Edinburgh, Scotland - A closed-circuit television surveillance van monitoring the area around a government housing complex in the Pilton area was attacked by a group of youths early Saturday morning. They smashed the windows and threw a petrol bomb at it while two city employees were inside. This attack was one of several violent incidents which occurred after a 14 year-old was arrested by police on burglary charges. Youths in the area feel that they are being unfairly harassed and profiled by police. Two 15 year-olds were arrested in connection with the fire-bomb attack. No one was hurt.