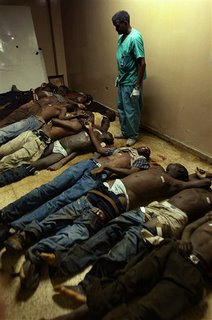 Dajabon, Haiti - Two protesters were killed and seven others injured after troops fired on them. The shooting began after some demonstrators through stones at the troops of the United Nations Stabilization Mission and Dominican troops who were guarding the border. The protest against the border was organized after 24 Haitian men suffocated to death while attempting to cross the border illegally in an air tight sealed truck. The men were planning on finding work on the Dominican side so that they could support their families. The Dominican Republic buried the immigrant's bodies in a mass grave. They said they could not return them to their families because of the demonstration.