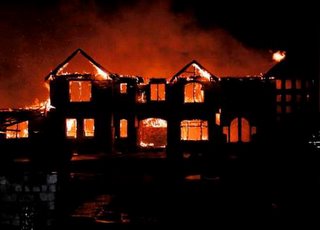 Camano Island, Washington - Authorities suspect that environmentalists acting on behalf of the Earth Liberation Front (ELF) are responsible for burning down a nearly completed 9,600-square-foot house, $3 million house Tuesday morning. Investigators would only say that: someone spray-painted a threatening message on a pink bedsheet and draped it across the front gate.

The ELF often target homes built in sprawling new developments. In the past year there have been at least two similar anti-sprawl arsons in King and Whatcom Counties. In the King County case the perpetrator(s) also left behind a sheet claiming responsibility. It was signed by the ELF. No one has ever been killed or injured in any ELF actions in the group's history, which began in England in 1992.