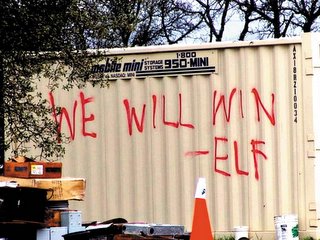 Auburn, California, U.S. - The FBI has arrested three community activists they claim were planning to blow up U.S. Forest Service property along with cell phone towers and power generators on behalf of the Earth Liberation Front (ELF). ELF is an underground radical environmental movement. Zachary O. Jensen, 20, of Monroe, Washington, Lauren Weiner, also 20, of Philadelphia, Pennsylvania, and Eric Taylor McDavid, 28, of nearby Foresthill, were taken into custody, without incident by an FBI Special Weapons and Tactics team and at least another dozen other state and local police, in the parking lot of an Auburn K-Mart store. The three are in Sacramento County Jail awaiting arraignments, which are expected to happen Tuesday.

Lauren Weiner is currently a student at The University Of The Arts in Philadelphia and had just arrived in California in the past week. She told her friends that she was planning to take part in a glass blowing internship program in California, for the semester.

Dave Picard, assistant special agent in charge of the FBI's Sacramento office, said that he had nothing to indicate that there was any imminent danger to the public; but emphasised that "these people could have done a lot of harm to people and property." The ELF, which has committed hundreds of acts of arson, sabotage, and vandalism since it's founding in 1992 has never harmed a single person.

Federal agents said that the arrests were the culmination of a nearly year long investigation. Special Agent John Cauthen said and that they believe that the three had "a loose association" with the four Newcastle residents who were arrested last year in connection with a string of ELF arsons and attempted arsons in Auburn County. Three of the four Newcastle suspects pled guilty and are awaiting sentencing. A fourth is awaiting trial.