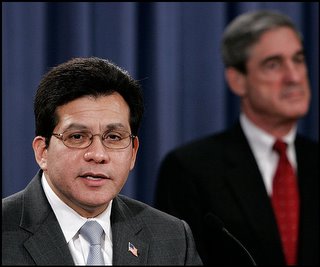 Washington DC, U.S. - Attorney General Alberto R. Gonzales, FBI Director Robert Mueller, and ATF Director Carl Truscott announced a total of 11 indictments in relation to a string of environmentally motivated arsons between 1996 and 2001. Credit for most of the arsons was claimed by The Earth or Animal Liberation Fronts. The first seven indictments were handed down early last month. One of the first people arrested was Bill Rodgers who is believed to have killed himself while in custody. Two more individuals Jonathan Paul, a wealthy independent wildland firefighter and Suzanne Savoie, a developmentally disabled children's caregiver were arrested earlier in the week.

A total of three suspects remain at large and are thought to be living abroad. Josephine Overaker, a.k.a. Lisa Rachelle Quintana and/or Maria Quintana is believed to be living in Germany. Rebecca Rubin, a former North Vancouver, Canada, resident was charged by the Canadian Royal Mounted Police (RCMP) in 1998 with committing actions on behalf of the Animal Liberation Front (ALF), but the charges were dropped soon after. Darren Thurston was also arrested in relation to that case. He has been convicted twice for committing ALF actions in Canada.

Joseph Dibee, of Seattle is an environmental activist who worked for Greenpeace and the Sea Defense Alliance, which Jonathan Paul was also apart of. The two had a public falling out when the group split in 1999. Like some of the others who were indicted Joe was active in campaigns in Canada.

The only evidence in the 83 page indictment comes from the testimony of five "confidential sources." Two of the confidential sources, Jacob Ferguson and Stanislas Meyerhoff, who were also indicted. A third is reportedly Jen Kolar, but this has yet to be confirmed. In 1999 Jen and Joe Dibee hosted an Earth First! affiliated group called Buffalo Field Campaign. The FBI's indictments are taking some of the heat off the bureau in regards to the domestic spying scandal and in many cases came just before the statute of limitations was due to expire. The ELF does not seem to have been slowed down though; authorities credited them with a $2-3 million arson in Washington State in the past week.