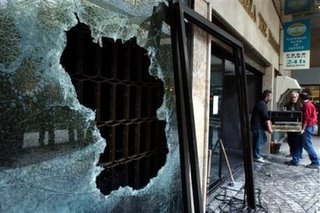 Athens, Greece - Anarchists are believed to be responsible for yet another firebomb attack that destroyed a central Athens bank last night. Greek anarchist groups have claimed responsibility for more than a half dozen arson and bomb attacks against various targets in the past month. Police attempting to catch the bombers have tried to draw a connection between anarchists and a gang of bank robbers known as the "Thieves in Black." Authorities claim they have discovered ties between anarchists and admitted bank robber and accused gang member Yiannis Dimitrakis who was arrested recently. Dimitrakis has refused to give investigators any information about his accomplices or their motives and political affiliation.