The Unfolding Case Against Daniel McGowan 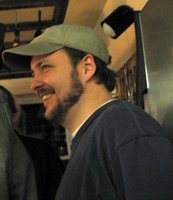 New York, New York, U.S. - In a very unusual turn of events, the government disclosed some interesting facts about their case against Daniel McGowan during his transfer/detention hearing in federal court on December 8th. Daniel was represented by attorney Martin Stolar, president of the New York chapter of the National Lawyers Guild. Five members of his very supportive and close knit family were in attendance, as well as his long-time girlfriend and about 25 friends and co-workers, who only learned of his arrest hours before.

Stolar was able to meet with him briefly before the hearing and passed a message from Daniel along to his family and friends that he is innocent and has no idea what this is all about and that he has never been a member of the Earth Liberation Front. His family was able to offer a 1 million dollar bond backed up by 3/4 of a million dollars in equity to secure his release. They were later able to raise their offer to 1.2 million dollars.

Magistrate Roanne Mann heard arguments from the Assistant U.S. Attorney that claimed Daniel is a flight risk and may flee in the face of the threat of life in prison. Stolar emphasized that Daniel would not run and allow the government to seize his entire family's assets and property leaving them "homeless and penniless". He implied that the charges that could leave Daniel with a life sentence would not hold up and made a reference to the joke that a Grand Jury would indict a ham sandwich.

The Assistant U.S. Attorney alleged that Daniel was a member of the Earth Liberation Front, an environmental group that commits acts of sabotage and property destruction. He said that this group has "extensive networks throughout the world and has experience secreting people." He went on to allege that Daniel had made use of these secret networks before in 2001 to "hide out" in Canada for six months.

The Assistant U.S. Attorney also weakly claimed Daniel could flee to Ireland, based on the fact that Daniel is Irish-American and has visited Ireland a couple of times. Stolar asserted that all of Daniel's relatives in Ireland had passed away, and that the FBI had confiscated his passport.

Eugene Police Department Detective and Sheriff's Deputy Gregory Scott Harvey was sworn in and took the stand in a very unusual move to support the claim that Daniel is a flight risk. Detective Harvey stated that in April of 2005, in northern Manhattan, a person wearing a recording device stood near Daniel as he recounted leaving Eugene (where he lived in 2001) because it was "too hot". Daniel was scheduled to participate in the Grassroots Animal Rights Conference in northern Manhattan in April 2005. At the weekend-long conference, at least two individuals who were thought to be law enforcement officers were asked to leave.

Detective Harvey was operating in New York at the time under the jurisdiction of the FBI at the time of the surveillance. Harvey alleged that Daniel hid out in a house on River Road on the outskirts of Eugene for a period with six other individuals responsible for arsons and that was hiding in Canada in late June and July of 2001.

He claimed that although Daniel has been working for years under his legal name and using his social security number, they were not able to find him because Daniel went by a number of different names, including Jamie Moran, during the five year period following the crime.

The government's case that Daniel was a flight risk rested so heavily on Detective Harvey's recorded conversation that the magistrate agreed to hear the tape before making a decision. The hearing was adjourned and continued the next day. Magistrate Roanne Mann's mind seemed made up on the following day's hearing and no bail was set.

Daniel was denied bail by a magistrate and not a judge, which means that he has an opportunity to appeal the magistrate's denial of bail to a judge. He is currently being detained at the Metropolitan Correctional Center of New York, where he can be reached by mail. His family has organized a support committee made up of his friends and supporters. They can be contacted at FriendsofDanielMcG@yahoo.com.