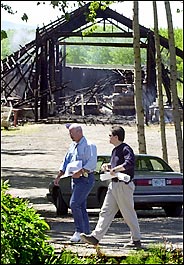 U.S. - The FBI and Homeland Security agents have stepped up their campaign against anarchists and animal rights and environmental activists. On Wednesday, in New York City, 31 year old Daniel Gerard McGowan was arrested while at work. His apartment was also raided and computer and person affects seized.

His arrest is in connection with a May 2001 Earth Liberation Front arson at Jefferson Poplar Farms near Portland Oregon. The arraignment will be at 11:00 am Thursday morning on the second floor of the Federal Court Building, which is located at at 225 Cadman Plaza East in Brooklyn.

Portland activists, Frank Winbigler and Shannon Nonny Urick were approached in a cafe by three FBI agents, one agent from Homeland Security, and an Oregon Sheriff. They were served with papers ordering them to be witnesses in a federal Grand Jury investigation, and were also advised that they are both targets of the same investigation. The Grand Jury is scheduled for March 16th of next year in Eugene, Oregon.

Later in the day more than a dozen FBI agents, along with Joint Terrorism Task Force and local police officers raided The Catalyst Infoshop in Prescott, Arizona. Environmental publications were seized and one of the groups founding members was arrested. The arraignment is scheduled for 10:00 am Thursday morning in Flagstaff where the federal courthouse is. Police in Arizona consider anarchists to be a terrorist threat.

Earlier in the week federal agents were asking around Boston for Daniel Andreas San Diego, who they allege is responsible for placing an explosive pipe bomb at Chiron Corp in Emeryville, California on August 28, 2003. The Chiron Corp, a biotechnology company, was a target of the animal rights campaign to shut down Huntingdon Life Sciences, a company that performs cruel experiments on animals.

This most recent attack on the earth and animal liberation movements was obviously well coordinated and planned far in advance. Activists across the country have been doing what they can to protect themselves by sharing information about how to avoid dealing with authorities and developing a better security culture.