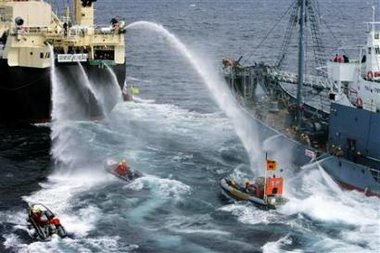 Southern Ocean - Greenpeace activists in rubber rafts are doing their best to thwart Japanese whaling ships as they hunt minke whales. The whalers fired high pressure hoses at the small Greenpeace crafts in effort to keep them away. The whalers were successful in killing at least six mink whales when the seas became too rough for Greenpeace to deploy the small boats which had been positioning themselves between the whales and the harpoons.

Japan agreed to an international moratorium on commercial whaling in 1986, but resumed slaughtering whales for meat the following year by exploiting a loophole that allowed killing whales for scientific purposes. In June Japan announced plans plans to nearly double its annual catch of minke whales to 850 and add fin whales and eventually humpbacks. Fin and humpback whales are both endangered species.