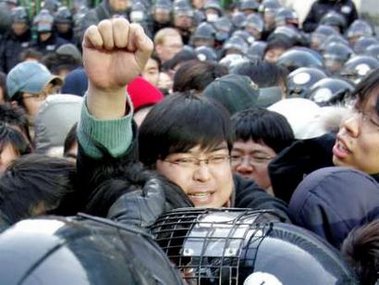 Protesters scuffle with police outside of the headquarters of the National Police Agency.

Seoul, South Korea - Korea's National Human Rights Commission has ruled that the recent deaths of anti-WTO protesters Hong Deok-pyo and Jeon Yong-cheol, was caused by an excessive use of force by police. Jeon Yong-cheol's death was also investigated by the Asian Human Rights Commission. The men were brutalized by riot police attached to the Seoul Metropolitan Police Agency during a massive November 15th protest in Seoul. The protest was organized by farmers in opposition to the the WTO's regulations that would affect South Korea's rice market.

Jeon died in Chungnam National University Hospital on November 24th, nine days after he was beaten on the back of his head, right eye and chest at the demonstration. Hong died on December 18th of complications arising from damage to his cervical vertebrae by an outside force. On November 15th police attempted to clear the streets with a strong show of force at 7pm. They failed to follow proper procedure in ordering the demonstrators to disperse.

Apologies from South Korean President Roh Moo-hyun and Commissioner General of the Korean National Police Agency, Huh Joon-young, failed to stop farmers from gathering outside the headquarters of the National Police Agency and calling for Huh's resignation. After observing few days of mourning for Jeon's death, a December 1st procession attempted to march to the Presidential Blue House, but were stopped by a wall of buses and aggressive riot police with water hoses (video).