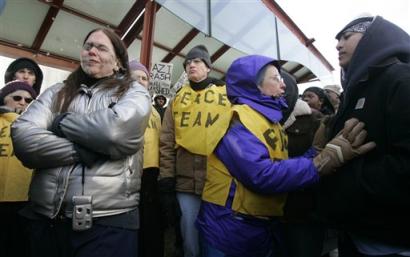 Neo-Nazi Molly Nolan with horse manure on her face

Toledo, Ohio - Members of the neo-Nazi National Socialist Movement group returned to Toledo two months after their presence on October 15th sparked a riot. Scores of riot police and unofficial peace police formed lines around the neo-Nazi demonstrators but were unable to protect them from flying clumps of hot horse manure and cold snow. Police roughed up and tasered up a number of demonstrators some of whom were arrested.