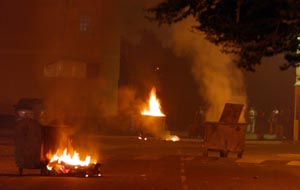 Manama, Bahrain - Rioters burned cars and set off explosives improvised out of gas canisters in the third straight night of unrest since a committee for Bahrain’s unemployed began protests against joblessness and to demand an official investigation into the case of Moussa Abdaali. Abdaali is a committee member who was beaten by unidentified men believed to be armed security officials. Rioters attacked police with stones and molotov cocktails before burning two police cars.