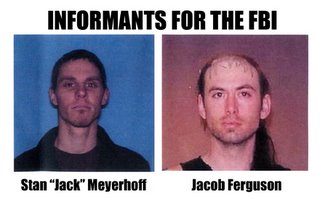 Eugene, Oregon, U.S. - Public defender Craig Weinerman named, known heroin and meth addict, Jacob "Sketcher D" Ferguson as one of the government informants who helped the F.B.I. arresst six individuals on charges stemming from Earth and Animal Liberation Front actions that occured between 1998 and 2001. One of the six arrested, Stanislas "Jack" Meyerhoff of Charlottesville, Virginia, has expressed remorse for his crimes and agreed to fully cooperate with investigators.

Meyerhoff is charged with knocking down an electrical transmission tower east of Bend, Oregon on the eve of the new year in 1999. He is alleged to have toppled the tower with a former South Eugene High School classmate, Chelsea Gerlach. He is also facing arson charges from a January, 2001 Superior Lumber Company fire in Glendale, Oregon and a May, 2001 fire at the Jefferson Poplar Farms in Clatskanie, Oregon along with Daniel G. McGowan of New York City. The state's case has so far relied solely on the testimony of three unnamed cooperating witnesses, but federal prosecutors promised to provide 1,000 pages of evidence to defense attorneys on Friday.