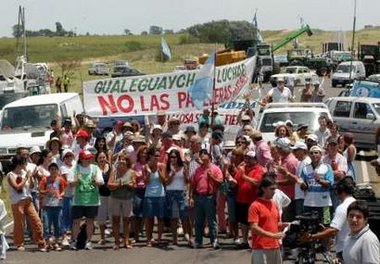 Entre Ríos, Argentina - Environmental groups organized three simultaneous road blockade protests that halted all vehicular traffic between Argentina and Uruguay. The three roads and bridges which connect the two countries have been closed in protest of two new European owned paper mills upstream on the Uruguay River. The demonstrations are already having a negative impact on Uruguay's economy which is benefited by a high volume of Argentine tourists who spend their summer holiday vacationing across the border. The mills are owned by ENCE of Spain and Botnia of Finland who have refused to agree not to dump chlorine and other chemicals into the river. The World Bank has written a report in support of the developments.