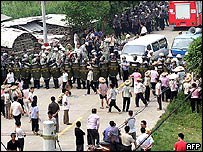 Dongzhou, Guangdong, China - Rural villagers near Shanwei were shot at by police while protesting a new power plant. At least two demonstrators died. Thousands of peasants took part in protests after corrupt government officials took allocated their land to build the power plant without compensating the villagers. Rural unrest has been a growing problem for the Chinese government in recent years. Much of it is caused by class and environmental injustice.