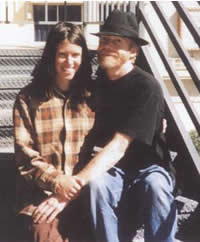 Flagstaff, Arizona - Prescott activist and bookstore owner William Coutney Rodgers, 40, was found dead in a Flagstaff jail cell while in federal custody. Some believe that he also went by the name Avalon. He was arrested Wednesday, December, 8th, in a four-state sting operation that netted five other individuals on charges relating to acts of sabotage and arson done on behalf of the Earth and Animal Liberation Fronts between 1998 and 2001. Authorities are claiming that he deliberately suffocated himself with a plastic bag.

Various news sources initially reported that Bill died on Monday, four days before authorities announced his death to the public. Some online news sources have changed their account of the story to say that he died on Thursday, the same day the Coconino County Sheriff's Office announced his tragic passing. Articles published more recently concur that he did die on Thursday and that the county medical examiner determined on that day that he died by suffocating himself with a plastic bag.

Bill was one of the six defendants who was fortunate enough to have strong community support. Much of his support was spearheaded by his girlfriend, Katie Rose Nelson. He was well-known and liked in the Prescott community, which has wholeheartedly defended his innocence. The case against him relied solely on the testimony of cooperating witnesses. The FBI alleged that Bill told an informant that he was going to break up with his girlfriend, and that he was "planning something big," involving some kind of arson, after the break-up. The information may have been released in order to weaken his support.

At a Friday detention hearing, an FBI agent testified that investigators found child pornography in Bill's home at the time of his arrest. This was done by the FBI agent to demonstrate Bill's criminal nature. Later, the FBI explained in detail that they had discovered only "two digital photos of nude, prepubescent girls." They did not say that children were in a sexual context, only that they were not clothed, which is not illegal. Local Arizona newspapers reported that Bill possessed "child pornography," which, although very far from being proven, would considerably weaken the strong public support that Bill had in the area.