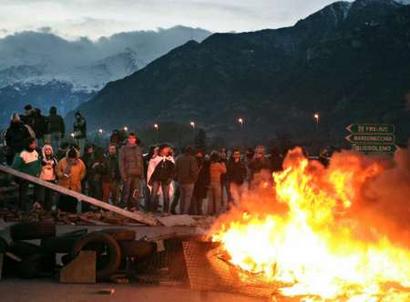 The Alps - Environmentalist demonstrators blocked roads and railway lines in an effort to stop work on a new high speed train line which they say will harm the mountain eco-systems. Protesters covered the nearby Italian city of Turin with pro-environmental graffiti just as it prepares to host the 2006 Winter Olympic Games which are are due to begin on February 10. Demonstrations against the rail link that will connect France and Italy have been growing in size and becoming more confrontational in the past week. Italian Prime Minister Silvio Berlusconi blamed extreme left and anarchist insurrectionist groups for this trend.