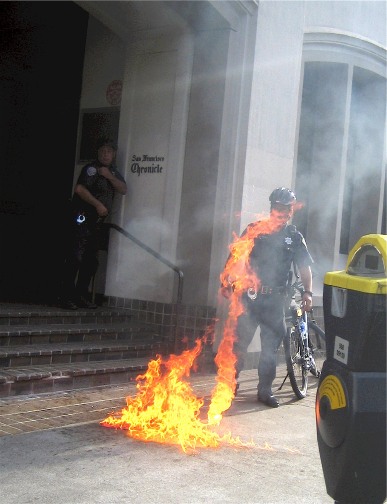 San Fransisco California, U.S. - A juvinile East Bay teenager was arrested for allegedly throwing a molotov cocktail at the San Francisco Chronicle Building during an anti-Bush demonstration organized by the Revolutionary Communist Party (RCP) front group The World Can't Wait. The incendiary struck the side of the building and set a police officer's clothing on fire. The demonstration billed as a student walk out to "drive out the Bush regime" was part of a recruitment drive, aimed at young people, planned by the opportunistic RCP who has previously organized as front groups called Refuse and Resist and Not In Our Name. Photographs, video stills