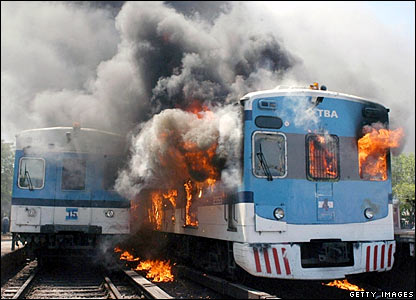 Haedo, Argentina - Irate commuter train passengers set fire to their train after being told it would not leave the station, about 15km (nine miles) west of Buenos Aires. A number of buildings and more than a dozen cars, including at least one police car were also burned. Six officers injured and 80 people were arrested.

Argentine officials blamed the outbreak on members of the railway unions and other leftists. The incident occurred only a day before U.S. president George Bush was scheduled to arrive in the country to attend the Americas Summit. The summit is already drawing massive numbers of demonstrators to the luxury resort, 230 miles south of the capital, where it is to be held. Large portions of the county's middle class was politicized by the December, 2001 economic crash which wiped out many people's savings.