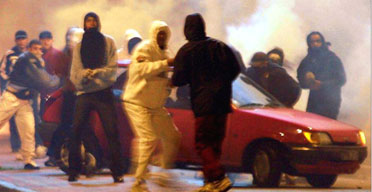 Europe - The French government has responded to nearly two weeks of destructive rioting by imposing emergency curfew laws that were written during and have not been used since Algeria's struggle for independence from France. Violent unrest which began in the suburbs of Paris has since spread to over 300 municipalities throughout the country and to numerous cities in neighboring Germany and Belgium.

German police have rejected the idea that any of the disturbances that left ten cars burned in cities across Germany were related to similar instances in France. A police spokesman in the western city of Cologne told the press, "We don't have Parisian conditions here." Instead, they suggested that revolutionary extremists may be responsible.

In Belgium, a number of vehicles were also set on fire and anarchists threw a molotov cocktail at the office of extreme right Flemish Interest party in Brugge and were later apprehended. Rioters in France have been using cell phones and text messages to coordinate guerrilla-style maneuvers in order to ambush police and attack property using tactics compared to those used by "anti-globalization protesters."

French authorities also arrested a number of internet bloggers suspected of inciting violence. The author of a blog called "Hardcore" was arrested after publishing a post titled "Destroy France," which allegedly called for rioters to "take out all of France."

On Wednesday night a school was burned down in the southern city of Toulouse, sabotage at two power substations in Lyon caused serious blackouts in the city, and serious arson attacks occurred elsewhere. Photos 1, 2