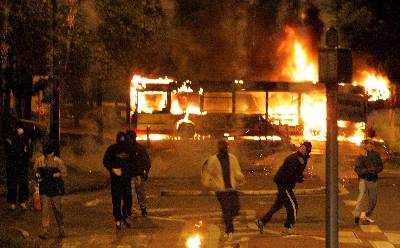 Europe - Clashes between angry youths and police reached the city center of Lyon, France. It was the first time rioting reached a major city center since the unrest began 17 days ago. Police and soldiers have been preparing to deal with similar disturbances should they occur in the Paris city center after intercepting a large amount of mobile phone text messages and internet posts calling for people to go there. In the southern city of Carpentras two schools and a number of other buildings were set ablaze.

Riots first broke out in the suburbs of Paris but quickly spread throughout the country and have broken out on a smaller scale in the neighboring countries of Belgium, Germany, the Netherlands, Spain, Portugal, and more recently Denmark. In Greece, anarchists attacked a French school with paint bombs as a show of solidarity with the rioters.