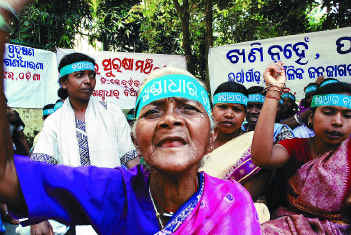 Anti-mine protest outside the Pollution Control Board office in Bhubaneswar

Jajpur, Orissa, India - Hundreds of tribal people from the Chandia, Baligoth and Ugraghati villages surrounded and attacked the Kalinganagar police station after police arrested tribal leaders who have been resisting the theft and industrial development of their ancestral lands. Villagers also blockaded roads surrounding the area to prevent officials from sending reinforcements.

Police charged the anti-development leaders with extorting truck drivers that passed through the village. Villagers claim that the charges are bogus and that the police are simply trying to break up their resistance.

In May, members of one of the villages clashed with police and government officials, leaving at least six officials injured, including a district magistrate and a police inspector who both received head and face injuries from projectiles. Villagers were also injured, and some were forced to flee to the mountains. While in hiding, at least four tribal people died; among them were two young children.

Government officials have been working to industrialize the region in collusion with big business interests. The indigenous tribes who have lived there for centuries are often, as in this instance, offered little to no compensation or choice in the matter.

Tribal people from the Gadpur, Khurunti, Chandia, Baligoth, and Ugraghati villages are being threatened with displacement in order to make way for a steel plant and mining operation. Tribes in the Kashipur district have been beaten and teargassed for opposing aluminum plants.

Officially, 62 distinct tribal cultures live in Orissa. That number is guaranteed to decrease significantly as industry continues to encroach on traditional tribal lands.