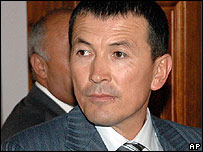 Moldavanovka, Kyrgyzstan - Inmates at a tuberculosis prison hospital shot and killed Tynychbek Akmatbayev, a member of parliament and chairman of the committee on security and policing. His bodyguard and aide where also killed in the uprising which preceded the prisoners taking control of the entire prison. The incident follows riots at the nearby Novopokrovka prison which lasted two days. Akmatbayev had been credited with helping to negotiate the end of that uprising. The inmates were protesting about bad food, damp conditions, inadequate clothing and a lack of hot water.