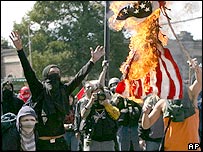 Santiago, Chile - Masked anarchist demonstrators clashed with police near the University of Chile's social science building in a protest commemorating the Pinochet dictatorship. Police, who were attacked with molotov cocktails, choked the campus with teargas and unsuccessfully pursued protesters through the school. Confrontations also broke out in a cemetery where a memorial was held for the victims of Pinochet's reign of terror. Fighting spread to working class neighborhoods where some of the 10,000 police, who were deployed, fired live ammunition at demonstrators killing one 16 year old boy. September 11 is remembered as the day General Augusto Pinochet staged a successful C.I.A. backed right-wing coup d'etat in 1973. Each year since the dictatorship ended in 1990 anti-fascists have marked the anniversary by holding demonstrations.