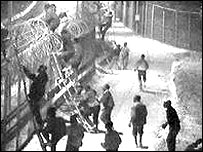 Melilla, Spanish Territory, North Africa – Hundreds of desperate African immigrants made an attempt to illegally cross the Moroccan Spanish border in mass. The immigrants used hundreds of homemade ladders to scale fences and cell phones to coordinate with supports on the Spanish side of the border. Spanish Guardia Civil police responded with heavy handed riot control tactics to repel most of the immigrants. At least 100 Africans successfully made it across and were being questioned by Spanish authorities. The international humanitarian organization Doctors Without Borders criticized both Spanish and Moroccan security forces for using excessive violence which left dozens injured.