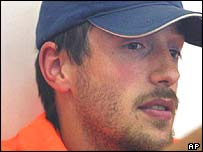 Israel - Former Israeli Defense Forces sergeant Taysir Hayb has been sentenced to eight years in prison for shooting and killing British activist, Tom Hurndall. Taysir Hayb shot him in the head using a sniper rifle with a telescopic lens. Tom was in Palestine working with the human rights group, International Solidarity Movement escorting a group of children away from the soldiers when he was shot. Many criticize the sentence as too lenient but are hopeful that it will send a message to other soldiers.