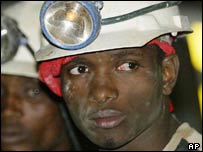 South Africa - Gold mining in South Africa has come to a standstill after miners nationwide went on strike. South Africa's mines contribute a huge 8% to the country's gross national product and 15% of gold output globally. 100,000 workers, most of whom are with the the National Union of Mineworkers, have stopped work and are refusing to go back underground for the small 5-6% pay raise which management has offered since the dispute began. The stoppage is now in its second day and is estimated to be costing $24m in lost revenue per day. Miners are demanding better pay and improved living conditions which have changed little since the apartheid-era. The strike is the first for the industry in 18 years but is also rare because white and black workers are maintaining solidarity.