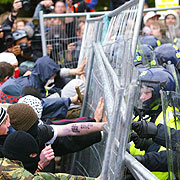 Auchterarder, Scotland - Yesterday anti-capitalist protesters blockaded miles of highway, burned and vandalised corporate buildings and banks, and breached the security perimeter around the Gleneagles Hotel as it hosted the G8 meetings. In today's early predawn hours police attempted to get control of the situation by surrounding the main Eco-Village campsite which is housing about 5000 of the demonstrators. Although many individuals were stopped, searched and photographed police made less than 200 arrests. Tomorrow anarchists where planning to hold a "Boogie on the Bridge" street party in Glasgow. It is unclear if today's police action or the terrorist bombings in London will have an impact on this event.