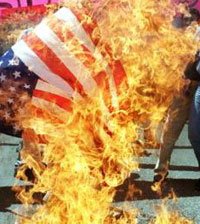 Sarasota, Florida - Only a week after the US House of Representatives passed a constitutional amendment baring flag burning two teens Scott A. Baber, 18, and Brian A. Richard III, 18, were arrested on allegations of lighting up six US flags. The police were called because many of the flags were attached to people's homes in the subdivision of Bent Tree where the pair lived. Police claim to have caught them in the act of attempting to torch an automobile and confessed to be anarchists. They face several counts of arson, criminal mischief and possession and manufacture of a fire bomb. A judge set bail at $101,120 for Baber, who was described in police reports as a lookout, and $402,120 for Richard. Barber has been released but Richard is still in jail.